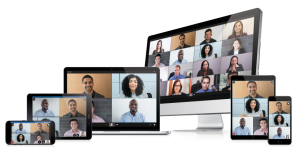 After using a licensed version of Zoom for a month, I began casting about for free alternatives that would satisfy the basic needs of a couple group meetings that we participate in regularly. Don’t get me wrong. I like, Zoom. I just didn’t want to spend the money right now for something I could get by on for free. I’m cheap that way.

Our needs are pretty minimal: Allow for at least 10 participants, have screen sharing and offer meetings lasting up to 2 hours.

I subscribe to several tech-oriented newsletters and so have received links to a bunch of articles that point to Zoom alternatives. But none seem to have all the services I have found, each only pointing to a few. Here’s my offering of listing all the options I have found so far. I’m not trying to review them all as I haven’t had time to thoroughly test each service. And the services keep evolving faster than I can keep track.

I will list my top two free services and then the rest I’ve at least looked at.

Jitsi – So far this is my favorite. It’s dead simple to use from their website, and has apps for mobile devices (iOS, Android). At the time I checked the limit was set to 75 participants if you are using their server. There are no time limits. It touts end to end encryption and screen sharing. For large groups it has the hand raising feature so a moderator can have some control of the conversation. Most interesting of all. it’s an open source project which means anyone can download it and build apps on top of the code or modify the code. You can also run your own Jitsi server if you have the chops and want to go beyond their server limits. There are additional features like recording your calls that make this pretty robust for a free service.

Google Hangouts –  This was the first free video conferencing system I’d tried and, though it seems to be in constant flux, it still holds its own. They’ve opened up the number of participants to only 25 people per call (with the 10 most active participants shown at the bottom of the screen). You can record your calls, but to store the calls in your account you would have to pay a small monthly fee. This post has a feature comparison between Zoom and Hangouts

Google Duo – Duo has a nice interface. However, I couldn’t find a screen sharing feature. Also, you connect with people using their phone number. So, that’s a different approach. There is a limit to 12 people and has end to end encryption.

Skype – Part of the Microsoft family, Skype has been around for quite a long time and it’s pretty robust. From their Fair Use Policy on Group Video: “Group video calls are subject to a fair usage limit of 100 hours per month with no more than 10 hours per day and a limit of 4 hours per individual video call. Once these limits have been reached, the video will switch off and the call will convert to an audio call. If a participant of a group video call is not on a version of Internet Communications Software that supports group video calls, then the call will be an audio call only for that participant. The number of permitted participants on a group video call varies from 3 to a maximum of 50, depending upon device and associated system requirements. You can find more details at www.skype.com/go/gvc.” I didn’t find a screen sharing feature, though, so this makes it not so great for my purposes.

Discord – This service was originally built for gamers to chat,  but is now used by a variety of groups. The video/screen sharing service is limited to 10 people. I have had limited experience with this service, but plan to give it a try just to learn its capabilities. Desktop and App versions. There’s even one for Linux! That’s unusual.

Spike – This is an interesting option that combines email and video conferencing. It’s also free if you are using a generic email account like @gmail.com or @yahoo.com. However, the free version is limited to 10 chat participants. But if you are using a custom domain email like @morsemedia.net then it’s $5.99/mo paid annually, and there are no limits.

That’s it for now. I’m sure more services will appear as video conferencing will not be going away, even as the pandemic fades. What did I miss? What are your favorites? Let me know in the comments.